Tour starts by taking the coastal and inland roads to Mostar in neighboring Bosnia & Herzegovina.
After crossing the Croatian / Bosnia & Herzegovinian border you’ll get a full run down of the country, hear all about the local history and life in the present, break up of Yugoslavia and the early 1990’s war.
Mostar is known for it’s mix of Ottoman & Christian architecture, maze of cobbled streets, street side cafes, taverns, mosques, churches and it’s famous 16th century Old Bridge which crosses the Neretva River.
Mostar was directly affected in the 1993 war and many of the buildings still pay testimony to that period, although  nowadays is very safe and increasingly popular.
The cuisine in Mostar has a distinct oriental influence like different kebabs, finger shaped ground meat balls called Cevapi, baclavas, Turkish coffee and more. 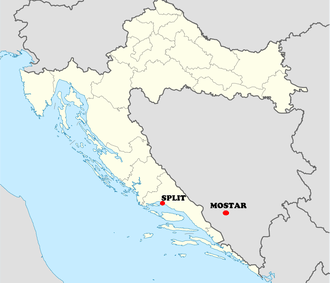 Tour type: walking tour
Duration: 8 hours
Period: all year long
Meeting point:: If you’re arriving by cruise liner your guide will be waiting for you in front or your ship or tender with your name on a sign.

Private tour for up to 2:

Private tour for up to 4:

Private tour for up to 6:

Private tour for up to 8:

If your group has more than 10 people send us an inquiry for a special quote.

Tour includes: Expert local licensed guide, air-conditioned transport, highway & parking tolls.
Tour does not include: entrance fees & meals.
Special note: The pilgrimmage site of Medjugorje is close to Mostar and can be added to the tour.
Your inquiries: Please feel free to contact us at: privateguidescroatia@gmail.com