A 30 min drive from Split is the small rural town of Sinj, known as the bread basket of the Dalmatian Coast. In 1715 it was a David vs Goliath scene A 90 min drive from Split is the south-west Bosnian town of Livno. On crossing the border you’ll drive alongside Europe’s second biggest hydro dam at an altitude of 720 meters (2,300 feet) encircled by the Dinaric mountain range, truly picturesque.
Upon arrival in Livno you’ll visit the Franciscan monastery which boasts one of the best museums in the country. One of it’s highlights is a 3,600 year old wooden sarcophagus and the remains of the woolen fibers the mummy was wrapped in!
In the monastery an academic painter has his permanent exhibition which is an absolute treat.
Livno is predominately Christian although it’s upper town has a small local Muslim population and the houses, mosques and architecture are remnants of the Ottoman Empire which controlled Bosnia for 500 years.
While in the upper town you’ll visit the Duman river source & cave which offer a multitude of local legends.
For centuries Livno has been known as the town of cheese due to it’s organic pristine conditions and a visit to a family run dairy can be arranged.
For nature and animal lovers a short drive to the Kruze plateau will be organized to see over 200 wild horses & their foals which descend from the nearby mountains to graze. Not many places in Europe can offer this.
During the early 1990’s Homeland War, Livno was a front line town and you’ll drive across the field to where battles took place, seeing a bombed out tank & transporter vehicle and meet with a local war veteran who talks about his experiences and shows photos from the period.
There are great restaurants, bistros and a local pub which serves craft brewed beer.
The locals are genuinely hospitable and being off the beaten path few foreigners can boast to have been there. 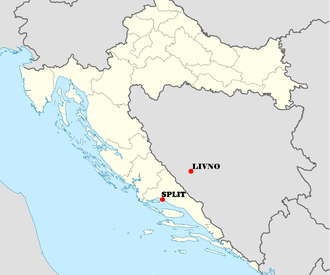 Tour type: walking tour
Duration: 8 hours
Period: all year long
Meeting point:: If you’re arriving by cruise liner your guide will be waiting for you in front or your ship or tender with your name on a sign.

Please send us an inquiry for a quote.