A short drive to Split’s neighboring satellite town of Solin to visit the ancient Roman ruins of Salona.
Salona dates back to the 2nd century BC and had all the infrastructure of all other Roman towns and reached it’s peak in the 3rd & 4th centuries AD, due to the fact that it was the birth place of Emperor Diocletian.
You’ll see the defense walls, aqueduct, basilicas, thermal baths, theater, sarcophagi, amphitheater and more.
Seeing Salona puts the whole Roman era into perspective.
The tour continues with a coastal drive to the UNESCO island town of Trogir where you’ll walk the streets & squares seeing all the old and contemporary sights and have time to take in the atmosphere at one of the many street side cafes.
After experiencing Trogir you’ll drive back to Split for a full tour of Diocletian’s Palace and the rest of the medieval part known as the ‘Old Town’.
After the tour you’ll have free time to explore on your own, do some shopping and indulge in the local cuisine. 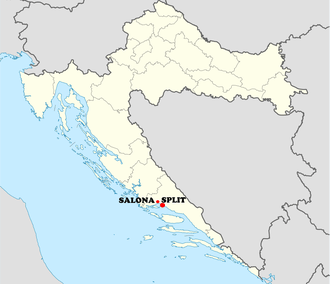 Tour type: walking tour
Duration: 6 hours
Period: all year long
Meeting point:If you’re arriving by cruise liner your guide will be waiting for you in front or your ship or tender with your name on a sign.

Please send us an inquiry for a quote.